It’s getting much harder to justify prosecuting people for cannabis when it is considered an essential business in legal weed states during the COVID-19 pandemic lockdowns. Now as police-abuse protests rage across the United States, the advancement of cannabis decriminalization may ease some of the pressure on cops to engage peaceful citizens who enjoy the happy plant. In the last few weeks, several unlikely regions have moved closer to cannabis decriminalization and new calls for national legalization have reached the halls of Congress.

“We need to legalize marijuana …. When we talk about police department reform we must end police officers continuing to arrest, search or jail the people of our country – predominantly people of color – for using marijuana,” Senator Bernie Sanders said in a floor speech this week.

“State after state have moved to legalize marijuana, and it is time for the federal government to do the same,” Sanders emphasized. “When we talk about police department reform, we must end police officers continuing to arrest, search or jail the people of our country, predominantly people of color, for using marijuana.”

There are only three states remaining that completely prohibit the use of cannabis: Idaho, South Dakota, and Nebraska (decriminalized small amounts). All 47 other states have either legalized marijuana for medical or recreational uses. 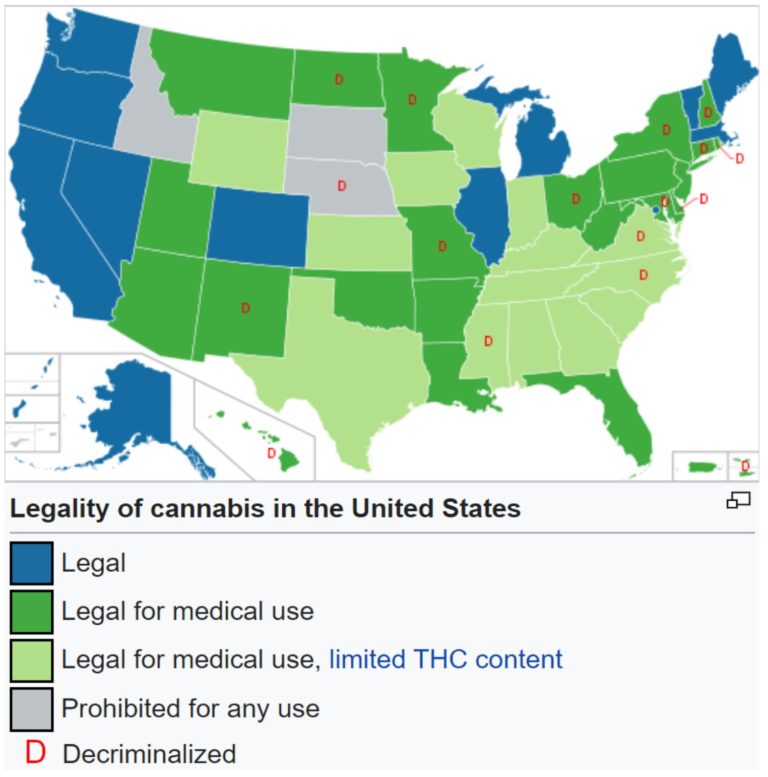 Before long the entire country may be able to enjoy smokable flowers, cannabis candy, and CBD products without the fear of men with guns throwing them in a cage.

This week the mayor of Kansas City, Missouri, Quinton Lucas, and some City Council members introduced an ordinance that would reduce violations against possession of cannabis.

“One of the ways we improve police-community relations is by eliminating laws that for too long have led to negative interactions, arrests, convictions, and disproportionate rates of incarceration of black men and black women,” Lucas said. “Reducing petty offenses – such as municipal marijuana offenses – reduce these negative interactions each day.”

The proposal in Kansas City would reduce the penalty to possessing under an ounce to a $25 fine.

On Thursday, New Jersey’s Assembly passed a bill to decriminalize possession of up to two ounces, replacing potential arrest with a fine of $50. Another bill in the New Jersey Senate would decriminalize up to a pound of dried flowers, and voters will decide full legalization this November.

“At two ounces, it would still be progress for the region. The reality is that for every increase is another life that could potentially be saved; somebody that could not be forced to encounter law enforcement,” said DeVaughn Ward of the Marijuana Policy Project.

Although decriminalization with fines is preferable to being arrested, it still gives police an excuse to engage in unwarranted searches and other potential harassment.

Also this week, activists in Montana handed in enough signatures to qualify legalization initiatives for the November ballot and the Democratic Party of Montana formally endorsed cannabis legalization as part of their platform. Marijuana Moment reports:

The party said it supports the “removal of Marijuana from Schedule 1 of the Federal Controlled Substances Act,” one plank states.

Members also backed adding language to the Montana constitution to “establish the legal age for purchasing, consuming, or possessing marijuana at 21 years of age or older.”

The platform further calls more broadly for “addressing substance abuse as a public health issue, rather than a criminal issue,” among other reform policies.

Several other states have initiatives to legalize marijuana or ease restrictions.

Meanwhile, it seems barbaric and fiscally irresponsible to continue keeping non-violent cannabis offenders locked behind bars, especially since it is considered an “essential” business in legal states. Incidentally, some states are moving to release marijuana offenders from prison.

On Monday, legislators in Colorado passed a bill that would allow the governor to mass-pardon cannabis possession convictions.

The legislation states that the “governor may grant pardons to a class of defendants who were convicted of the possession of up to two ounces of marijuana without an application and without seeking the comment of the district attorneys and judges for those cases.”

Three days ago, the Nevada State Board of Pardons Commissioner passed an amendment that immediately pardoned over 15,000 people convicted of cannabis possession with more expected to be freed.

“Today is an historic day for those who were convicted of what has long been considered a trivial crime, and is now legal under Nevada law,” said Governor Steve Sisolak in a press release.

Since the passage of Question 2 in 2016 and the decriminalization of possession for small amounts of marijuana, many Nevadans have had these minor offenses remain on their records, in some cases as a felony. This resolution aims to correct that and fully restore any rights lost as a result of these convictions.

“Today we took another step toward justice by pardoning thousands of Nevadans for actions that Nevadans decided should no longer be illegal,” Nevada Attorney General Aaron D. Ford added. “I’m proud to work alongside Governor Sisolak to make it easier for these Nevadans to get jobs, housing, and financial aid for college. Together, we’re making criminal justice reform a priority across Nevada.”

As states and cities develop their own diverse frameworks for cannabis reform, the federal government is feeling the pressure to chill out on weed as well.

Although President Trump talks tough on drugs, federal raids of legal cannabis operations have ceased during his Administration compared to the frequent raids under the Obama regime. Perhaps Trump can read the tea leaves as national polls show support for legalization at record levels. 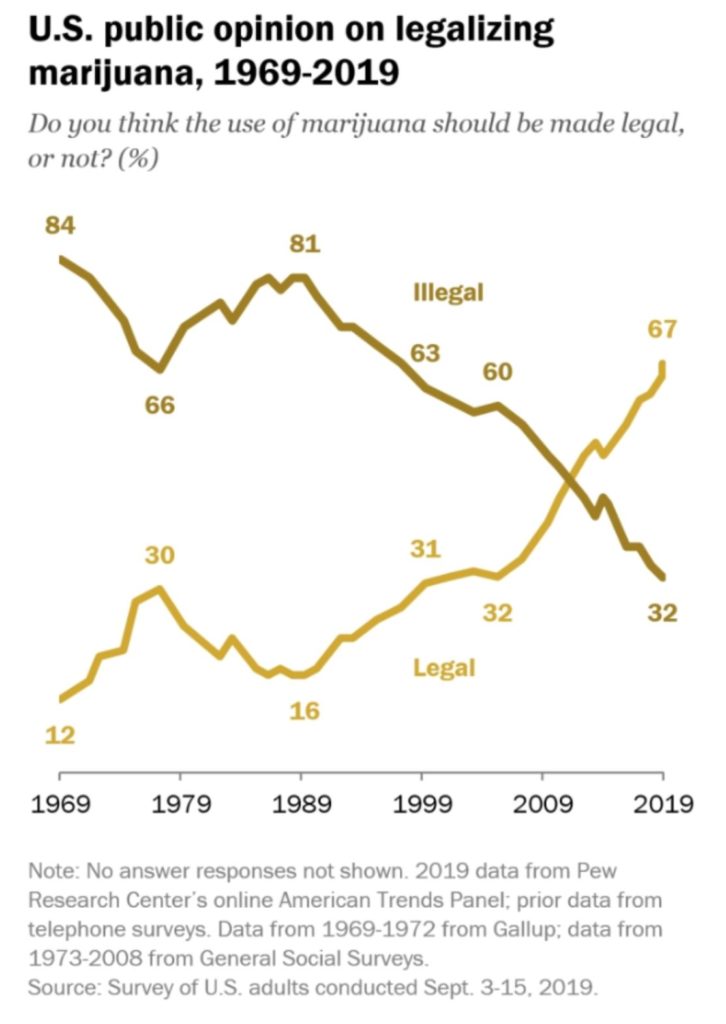 A new lawsuit may force the federal government’s hand. In May, Dr. Sue Sisley with the Scottsdale Research Institute (SRI) in Arizona, along with three military veterans, filed a legal action against the Drug Enforcement Administration (DEA) in the U.S. Court of Appeals for the Ninth Circuit.

The lawsuit challenges marijuana’s Schedule 1 classification under the Controlled Substance Act of having “no currently accepted medical use and a high potential for abuse.”

For ten years Dr. Sisley has been conducting clinical trials to test the effects of cannabis on veterans with PTSD. The results are expected to clearly show a medical use for cannabis with significantly fewer side effects than medicine currently offered to veterans, potentially paving a way for federal reform without legislation.

With lawmakers across the nation scrambling to find ways to rein in abusive police behavior, cannabis legalization provides a popular and impactful solution to drastically reducing police encounters and systematic racism in the justice system.

Forty-seven percent of all federal prisoners are serving time for drug crimes. About half of those arrested for drugs are for marijuana charges with 88% of those cases being simple possession. According to the ACLU, “Despite roughly equal usage rates, Blacks are 3.73 times more likely than whites to be arrested for marijuana.”

If lawmakers are serious about police reform and racial justice, legalizing cannabis and freeing prisoners held on possession charges should be front and center.

*****
Among us, poets are not paid. The poet/editor of this website, being physically disabled, lives at a fraction of her nation’s poverty level. Become a patron of the fine arts at: https://www.gofundme.com/are-you-a-patron-of-the-arts